With so many miles of coastline it was a matter of time lure fishing to be spread in our country. Now you can find anglers in every corner of Greece, from rocks to harbors and beaches. In each place and depending on the season, we will work different lures.

But there are places that we want lures with specific characteristics because otherwise we simply cannot fish. Such places are shallow, and when i say shallow i mean half a meter of water , where if we do not use the appropriate lure, we will lose a fortune ... 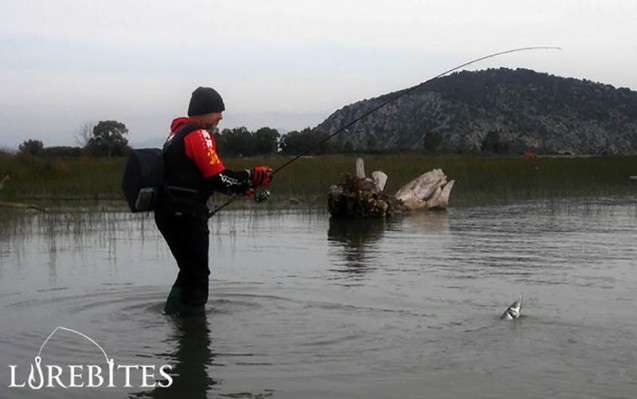 There are three types of shallow seabed. The first one is a beach with some good depth, but in the last meters are very shallow. The second one is the mixed bottom with scattered rocks that often is on top of the water. 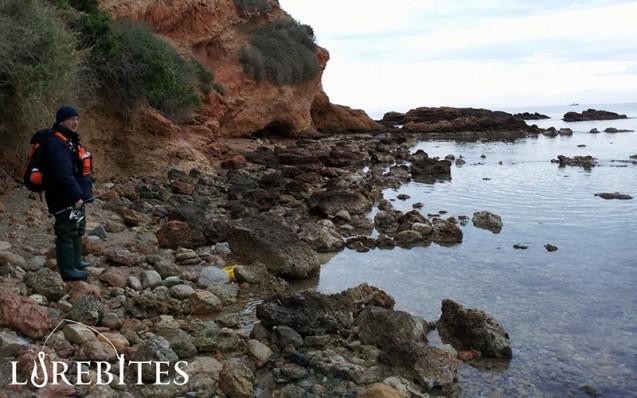 The third is shallow sandy beaches with algae or estuaries and lagoons. In these places we can include a small harbor with the same bottom characteristics. In all cases, however, we cannot use lures sinking more than fifty points when we reel them for the simple reason that they will be stack on the bottom. Indeed, sometimes it would be best not to have any draft. 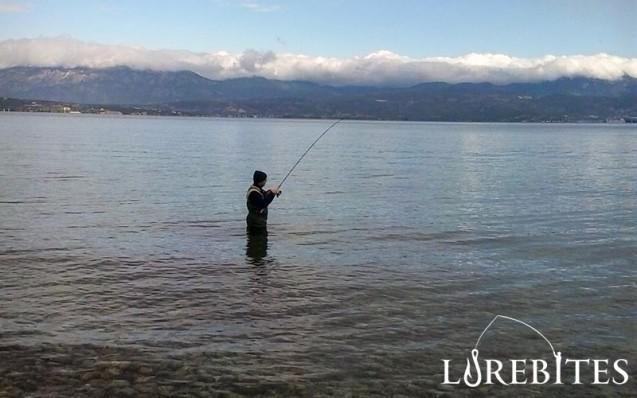 A solution for many people fishing in shallow water is waders or otherwise waterproof whole-body forms. At a cost of two to three good lures, we save a lot of money quickly as they let us fish in the water, so either our lures do not stack or we reach out to unstuck them. Apart from that, the comfort they give us by keeping us dry leave us to fish indiscriminately. 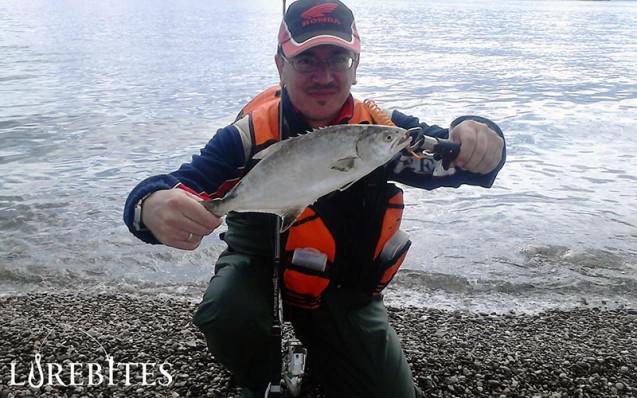 Fish such as seabass, lichia amia, horse mackerel, bluefish, and even needlefish like to hunt in the shallows, either with ambushes, or drive baitfish so shallow that they cannot escape. Even barracuda  are hunting before dawn on  very shallow beaches close to deep water. But the predominant hunter is no other than the seabass, which we meet almost in the shallows of our country. 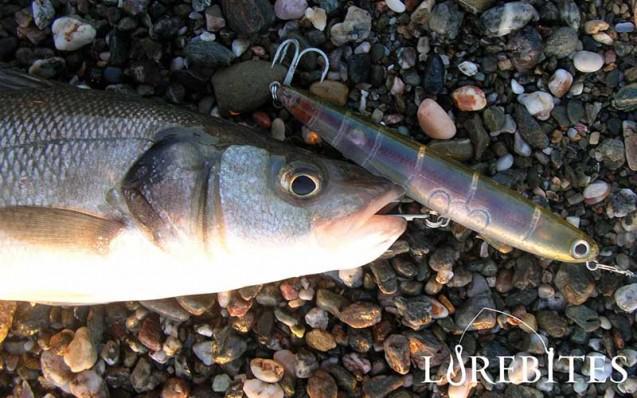 This fish was the motivation to fish with waders, but in the meantime  the variety of fish I caught was much larger than I was expecting. But what is the reason I urge you to fish in shallow waters? This is the conditions that are shaped in these places and help to easily trick the fish. Simply the wave  and the muddy water are always allies, allowing us to fool even this clever fish, which in other cases are hunting in the deep. But let's now see how we can choose such lures that will fish in these conditions. 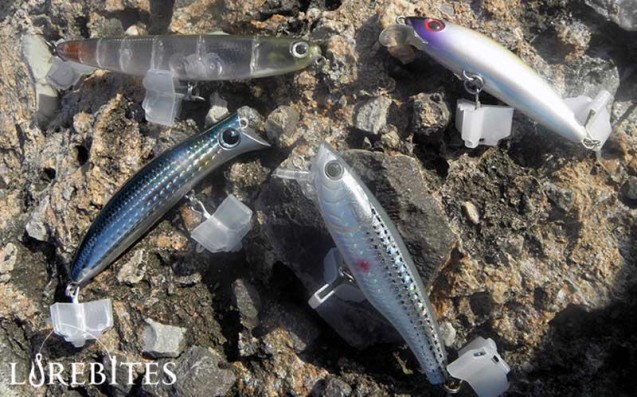 Of all types of lures, those that can fishing in shallow water are Top Water and some types of  minnows (Here we will focus only on hard baits and not soft lures). In Top Water there are the walk the dog lures(wtd), which have no lip, they float and are designed by the companies to move right and left at each strike of our rod. 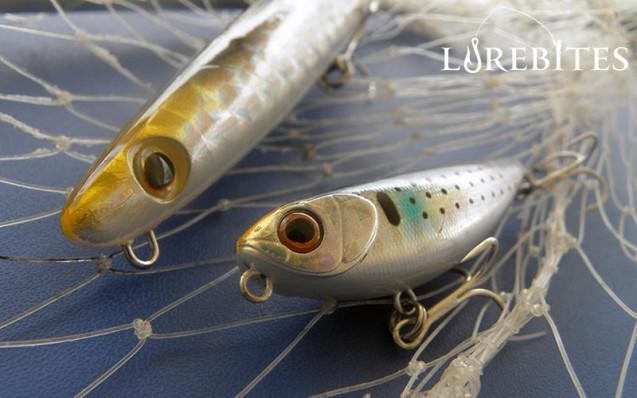 But there are also poppers that their face are almost vertical, resulting in each twitch to raise water in front of them. Both allow us to literally fish on all seabed's while targeting a wide range of fish species. The best thing though is that the images of the attack remain forever! Such lures are made by DUEL Silver Dog, IMA Salt Skimmer, RAPALA X-Rap Pop, SEASPIN Pro-Q, YOZURI Hydro Popper, SHIMANO Popper Bait, Blue Spin Pibara ,HTO Glide and many more. In both types there is a difference  between other lures hard and soft. We usually see the attack we are hurrying to hook up. We must  feel the rod bending and then hook up for better result. In minnow now things are a little more complicated. Here the internet will help us in finding the information we need to make the right choice. All major companies when they make a lure, they want to give beyond the other characteristics, a certain depth when we reel it. For example, in the photo below DUO informs us that Bullet will sink up to forty points, regardless of the speed we retrieve with the reel.

A YouTube video search will also give us a picture of how to use it. So by searching we can find out which minnow do not have much depth of sinking so we can use them in our fishing. Other such lures that I have discovered can be used in the shallow are: BASSDAY Log surf, TACKLE HOUSE Contact Feed Shallow, IMA Komomo 2 LITTLE JACK Borabress and RAPTURE Smile. In the last three you can sometimes see their back... so shallow they swim! 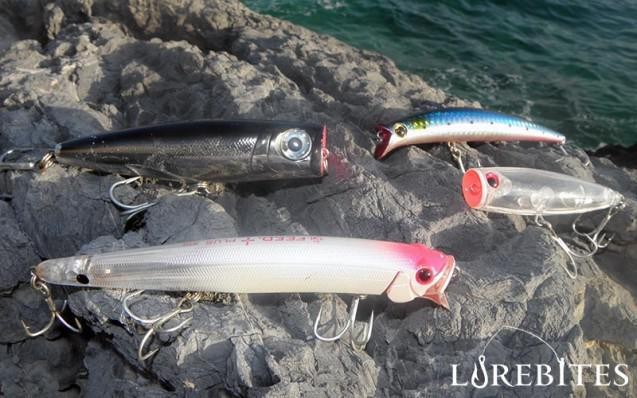 Of course there are many other lures waiting to be discovered. To help you, their common feature is the small lip and the floating buoyancy. Here we have to say that there are sinking lures that when you retrieve them also swim to the surface but personally I prefer not to risk it, because if for whatever reason we stop the retrieve, the lure will stay in the arms of Poseidon. It is a shame also for our pocket and for the environment, since we can only use them in deeper water. 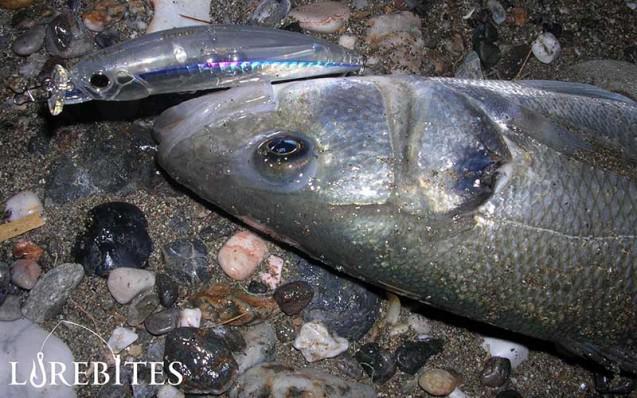 Something else in terms of size, it would be good not to be all the same. Five to fifteen centimeters is a good difference, so we can cover the different sizes of baitfish. Besides, in all spinning techniques, from LRF to heavy spin, there are various sizes lures in order to have a variety in ... the menu we serve to fish! The heaviest of these will help us make satisfactory casts and with windy conditions, so my logic says: variety in size and weight, and then color and shape.

A unique experience in shallow 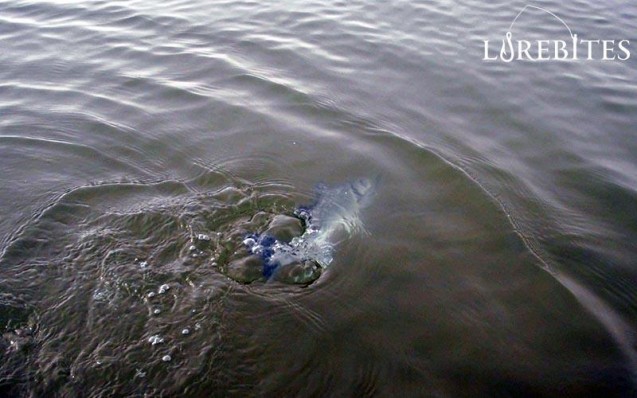 I will not forget an experience of last winter's fishing. It was fishing on a very fine sandy beach. There was almost no air. But he had a terrible waves, so the last step that burst the wave where the water stopped was at least twelve feet. With waders we were fishing in the water, with constant movement because you sank. Also it was very muddy with heavy clouds. For me these were the perfect conditions. The height of the wave was almost one meter. At some point I saw some horizontal rocks. I thought, "is it possible to hide under there?". 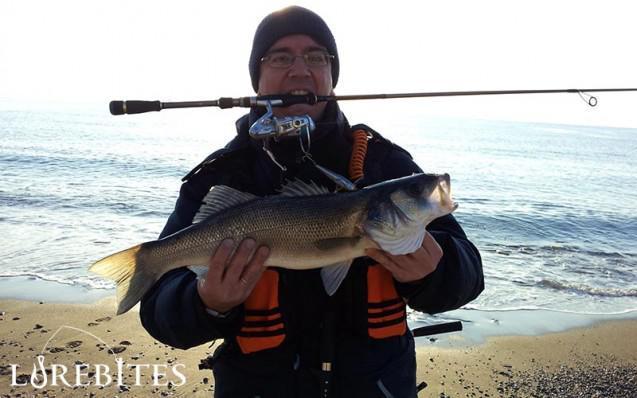 I put the Silver Dog and I cast, bringing the lure out with the rod up because if I put it down, the braid would be lost in  waves and lose its movement. Four meters before the end, I began retrieve it quickly. Then I saw an image that I will never forget ... A wall of muddy water a meter high with the lure in the center and a seabass coming furiously behind it, banging it and popping into the foams two feet from my feet. I was surprised and the wave took the fish back and started the party with the brakes. I hooked the fish and I shout to my friend to come and see what was happening. The fish did not want to come out because one wave was bringing the bass to my feet and the other  one was taking it back making it look like ten kilos. In the end I managed to run and landed on the shore. Surreal scenes, equipped with a rod with c.w. 5-20 g and a bass-fighter, two and a half kilos! 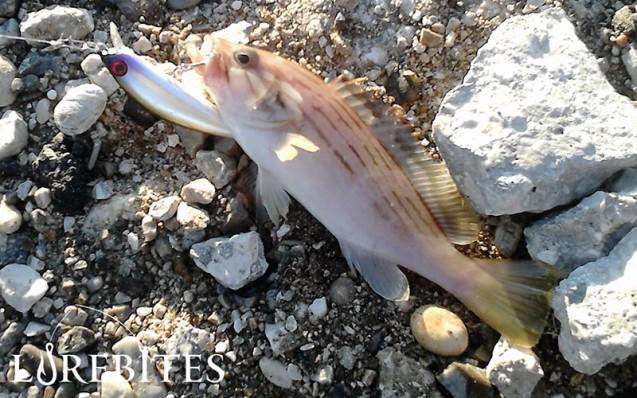 Let us not forget, however, that it is very frequent to grab our lures fish in sizes that must be released at all costs. There is no reason to keep fish that have not been reproduced once, just to take them home. My view is lure  fishing in general is a hobby and as such does not fit the thought "so much expense I did, let me keep the small". With less money, we go to a restaurant and eat as many fish as we want .